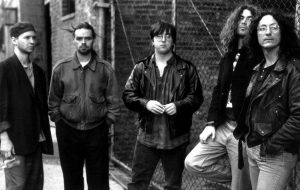 “It was chaos. It was inexplicable. It was in no way controllable, although attempts were made. It was and – God help us – still is a frame of mind. We had the unbelievable good fortune to stumble upon an audience. We lucked into two Hollywood movies. We had fights on stage, in front of the assembled people. Maybe they thought it was part of the show. Maybe it was the show. Things were said, things were done. Everything gone wild. Was it the music? Was it the personalities? Was it the audience? Was there a difference? The real story of the Drovers should probably never be told…” – Mike

The Drovers – A Band of Misfits
A Brief History
The Music

The Drovers are primarily a dance band influenced by the driving rhythms, meters and tempos of traditional Irish dance music – Jigs, Reels, Polkas (Single Reels), Slides and Hornpipes. The instrumental portions of the songs are basically examples of those forms. The vocal melodies found in The Drovers songs pay tribute to the Irish traditional style called Sean Nos’.

Early influences include Paddy Killoran who had a band in New York in the 1930s and 1940s and the The Pogues, a hugely successful band when the Drovers first started. The Drovers played Pogues songs in the very early days including, “Pair of Brown Eyes” and “Dirty Old Town.” Throughout the years there were many incarnations of the band and upwards of 25 band members over time. The music styles changed from year to year, month to month and even from song to song.

The Drovers grew out of Chicago’s Irish music tradition, not the rock music scene, and this placed them outside of the scope of major labels. For the most part, The Drovers were an independent band – putting on their own shows, booking their own tours, making, selling and distributing their own recordings, doing their own publicity. As a result, they grew an audience as diverse as themselves that were more concerned with Irish culture than pop culture.

The band performed thousands of shows between 1988 and 2001. Based in Chicago, they performed in Chicago, Minneapolis, Cleveland, Grand Rapids, Detroit; on the East coast in New York City, Boston, Philadelphia; and the West coast. They played the College circuit at Notre Dame, Northwestern, UNLV, Cal State, Tulane, MIT, Fordham and in Europe. They maintained a significant underground presence in the Pacific Rim, especially in Japan. They performed during the Golden Globes, at the Grand Ole Opry, with Jackie and Mike on the Carson Show, at the Guinness Fleadh with Elvis Costello, Van Morison, Los Lobos, John Lee Hooker, Billy Bragg,

Almost all the Drovers recordings were done live in the studio in one or two takes. The band recorded, mixed, and mastered on analogue tape, mostly. Rehearsals were rare. The Drovers fever-pitch touring schedule – up to 250 shows each year – allowed for little else. Recording studios included a construction site, a garage, warehouses, and basements of varying cleanliness.

“As we somehow made it through one show and the one after that, we also slipped through one career-crunching, business-breaking, and in some cases, life-threatening situation after another,” said Mike.

“Maybe we thought we were immune. Or bullet-proof. Or non-valent. Some elements of the Drovers make little sense, in retrospect. None of us had ever been in a rock band. Some had never been in any type of musical organization and had never played in front of an audience. Only a few of us had ever thought about music as a possible career. When originally hired, I was informed that I’d be playing keyboards and percussion. I don’t really play either, but since the band actually owned those instruments – and given the festive atmosphere – it seemed reasonable enough.”

Mike Kirkpatrick has been making music for the better part of four decades. Most of that time was spent fronting the Chicago-based folk rock band, The Drovers. The Drovers toured all over North America and Ireland in the ’80s and ’90s. There were many players that were called Drovers at one time or another. But, (in addition to Kirkpatrick), the main players consisted of David Callahan (bass, vocals), Sean Cleland (fiddle), Kathleen Keane (flute, accordion, whistle, vocals), Winston Damon (trombone, percussion, sax thumb piano) and Jackie Moran (drums, bodhrán).

The Drovers spent the rest of the nineties away from the studio and playing shows. When they weren’t gigging in and around Chicago, they were playing festivals like the Guinness Fleadh line-up or contributing to various compilations such as the Blink soundtrack. ~ Leon Jackson